A Fire at Greenacres – with many casualties… 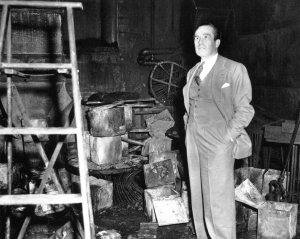 This was an incredibly sad event – one that was made even more monumental, when some prior events are pondered.

In July of 1938, Harold purchased the negatives of 114 of his early films from Pathé, his former distributor. Variety called this a purchase made for “sentimental and business reasons” – and while Lloyd the businessman might have liked the idea of gaining sole ownership of his films (so he could, for instance, safely and ethically recycle a successful gag from a past picture), there is no question that Harold wished to take care of his cinematic legacy himself.

Amongst the films now in his possession were most of his Lonesome Luke output, and scores of Glass Character one-reelers, along with all the multiple-reel and feature-length films. Lloyd stored his prized possessions in a newly constructed film vault, connected to the service buildings on his Greenacres estate. A little over five years later, something went terribly wrong.

On August 5, 1943, a nitrate explosion and fire ripped through the film vault, destroying most of the films Lloyd took possession of in 1938. Harold tried, diligently, to save as many of the cans of film as he could, running in and out of the vault, frantically tossing unhurt reels to safety. However, the damage was immense, and not just to the films.

Seven firefighters and one Greenacres employee were overcome by smoke inhalation, and were taken to a nearby hospital. The damage to the actual structure and surrounding property was estimated (by Harold) at $2 million.

However, the true casualty was film history, for most of the early films of Harold Lloyd perished in that fire.

A whopping 53 of the total 67 Lonesome Luke films are not known to survive, and most of them died that day. Granted, these Luke films were probably no masterpieces, but they were stepping stones in the continuing evolution of Lloyd’s greatness – and they’ll never be seen again – it’s still a shame.

Lonesome Luke was not the only screen character to suffer from the events of August 5, 1943. The following 18 Glass Character single-reel films (listed in the order in which they were produced) are not known to survive, and possibly were lost in the explosion:

Step Lively
The Lamb
Hit Him Again
Follow the Crowd
Sic ‘Em Towser
That’s Him
Bride and Gloom
Two Scrambled
Kicking the Germ Out of Germany
Bees In His Bonnet
Going! Going! Gone!
Wanted $5000
Si Senor
The Rajah
He Leads, Others Follow
Soft Money
Count the Votes
His Only Father

Don’t be too sad, however – the news is not all bad.

There is a lot of Lloyd for you to see…

The character that Harold Lloyd played before Lonesome Luke, Willie Work, is able to be seen in the lone surviving film of that series, Just Nuts. This was the film, ironically, that so impressed Pathé that they offered a contract to Hal Roach to distribute all of the Harold Lloyd Comedies. Pathé went on to distribute every Lloyd film through 1925.

A miraculous fourteen Lonesome Luke films are known to survive to this day:

Three of these titles (Luke Joins the Navy, Luke Locates the Loot and Lonesome Luke, Messenger) are amongst the holdings of the Harold Lloyd Film Estate and Trust. The other Luke shorts, as well as all the other extant films of Harold Lloyd, can be found in archives the world over: see the HL.us Archives page for an up-to-date list of all known repositories that house Lloyd films.

Happily, the Trust owns all of the multiple-reel and feature-length films, plus Lloyd’s two theatrically released compilations, and two clip-laden offerings (“Down Memory Lane” and “Laugh Parade”) produced for the Shriners in the 1940s.

Of the 81 produced, 63 single-reel Glass Character films are known to survive. Of that number, the following 32 (listed in the order in which they were produced) are held by the Trust:

Pinched
By the Sad Sea Waves
Rainbow Island
The Flirt
Move On
Bashful
The Big Idea
A Gasoline Wedding
Look Pleasant, Please
Here Come the Girls
Hey There!
Kicked Out
The Non-Stop Kid
It’s a Wild Life
Pipe the Whiskers
Why Pick on Me?
Take a Chance
Ask Father
The Dutiful Dub
Next Aisle Over
Ring Up the Curtain
The Marathon
Pistols for Breakfast
Off the Trolley
A Jazzed Honeymoon
Never Touched Me
Billy Blazes, Esq.
Heap Big Chief
A Sammy in Siberia
Pay Your Dues
Spring Fever
Just Neighbors

The remaining 31 extant single-reel Glass Character films (listed in the order in which they were produced) are held in the collections of other archives worldwide:

Over the Fence
Bliss
All Aboard
The Tip
Let’s Go
Beat It
On the Jump
Two Gun Gussie
Fireman, Save My Child
The City Slicker
Somewhere in Turkey
Are Crooks Dishonest?
An Ozark Romance
Swing Your Partners
Hear ‘Em Rave
Nothing But Trouble
She Loves Me Not
I’m On My Way
On the Fire
Look Out Below
Just Dropped In
Crack Your Heels
Young Mr. Jazz
Before Breakfast
Back to the Woods
Swat the Crook
At the Old Stage Door
A Jazzed Honeymoon
Chop Suey & Company
Don’t Shove
Be My Wife

Long may they live. And, here’s hoping that the continuing film preservation movement necessitates the addition of more extant films of Harold Lloyd!